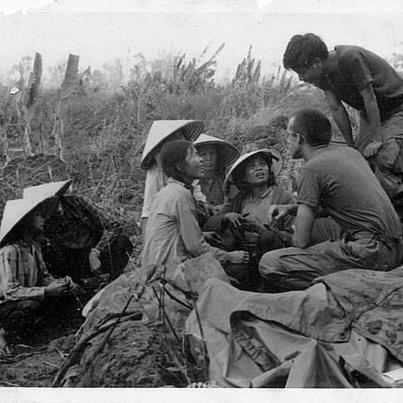 It is March 1969 in a place west of Saigon that the men called the Tobacco Field. They also called it Ambush Valley. Civilians were rare here, so when this group of farmers walked nearby, Captain Meager (hands on hips in middle photo) went to talk to them. Mark (who took the picture) said Capt. Meager asked them if there were Viet Cong nearby and they said, no, they didn’t know about any Viet Cong,

Capt. Meager sits, resting his elbow on his thigh, leaning forward, relaxed. His translator stands at his side, bent down, hands on knees, also relaxed. The women have gathered in front of them, faces open, smiling, interested. Men like this are new in their world and, war or not, they are intrigued.

No, there are no Viet Cong, they say. But look at the man second from the left. His posture is furtive. He leans so as to hide behind the women in front. Or perhaps he is simply leaning toward the woman to say something to her. He might be Viet Cong. Or he might be a farmer. There wasn’t always a difference.

This encounter took place during Mark’s second tour, the war in the jungle. During his first tour encounters with civilians were frequent and filled with anxiety. He always said that in spite of the fact that his second tour had been far more bloody, it was in some ways easier than the first because of the almost complete absence of civilians.