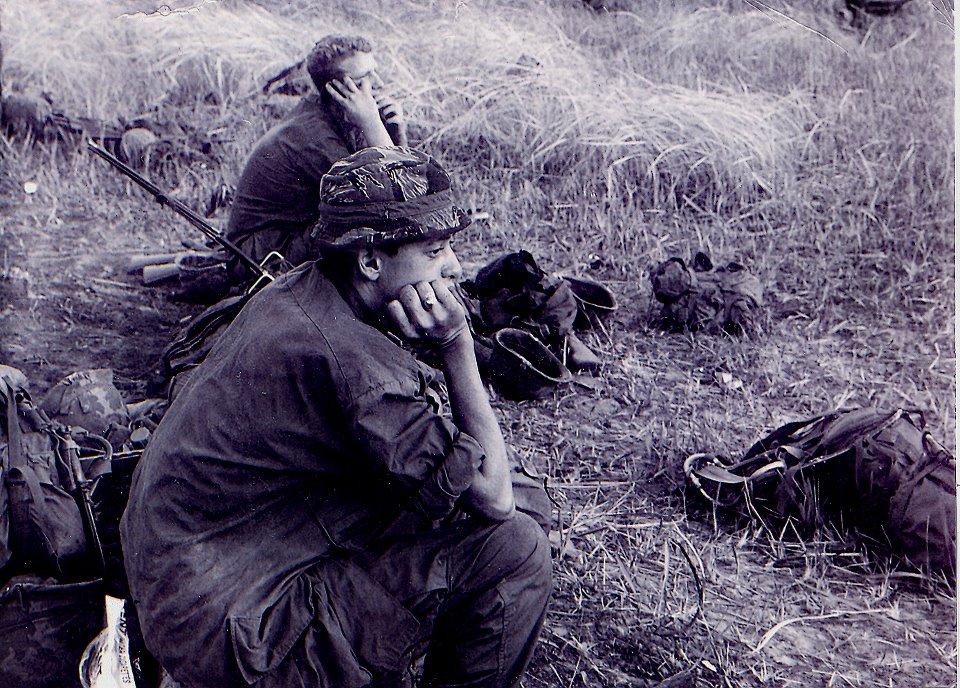 The men sit, brooding, waiting, exhausted. If they are told to do something, they are ready to do it, their equipment close by. Their weapons and personal belongings – is there a distinction? – are bundled into packs. For the moment their helmets are cast aside. The man in the foreground wears what Mark called a “hard-core hat.”

It’s the hard-core hat that makes the photograph work. If that hat had been a solid color it would have been too heavy. It would have interrupted the flow of texture that links foreground to background. As it is, its pattern echoes the grass behind the men and the scrub on the little path that winds amongst the packs and into the distance. The hat is the center point around which the composition rotates.

I get caught up in this, happy to be making use of my training in visual analysis. I admire the skill of the photographer who has given the composition focus but keeps that focus hidden by the interplay of tone and shade, light and dark, movement and stillness. As the viewer I am drawn along the path. I am curious about what is off to the right. I am seduced by the sensuality of surface. I am haunted by the eyes. This is a Good Photograph. I can see it hanging on a gallery wall with a caption :

At the time Mark Smith was not a professional photographer. He, too, was a soldier with a pack, a helmet, a weapon, and haunted eyes. He was 19, one year out of high school.

I try to tell him, now, how good the photograph is, what role the hat plays, the power of black and white. He accepts my comments, agrees about the black and white, but he does not want me to lose sight of this: