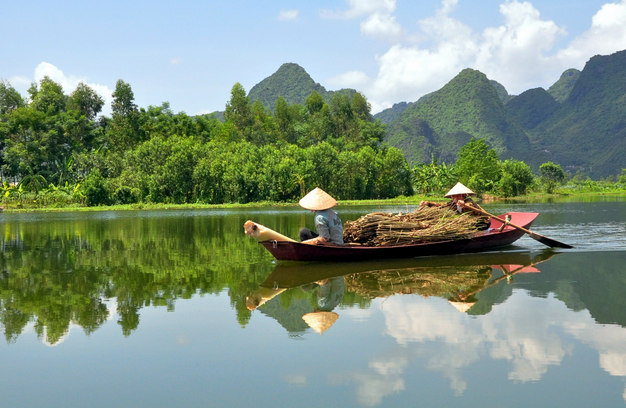 Many of the soldiers who fought in Vietnam saw it: the extraordinary beauty of the land they had come to destroy. They took note of the rich natural diversity, lush growth, and dazzling colors – and then called in napalm, dioxin-laden defoliants, and bombs so massive they lifted the tops of mountains. Such measures were “necessary,” it was said. Collateral damage. Acceptable loss.

Mark wrote about this as an infantryman on the ground in an area of jungle up toward Cambodia known as War Zone C:

At times the war seemed to have involved, not two sides, but four: American soldiers fought North Vietnamese soldiers and American airpower fought the forest. Sometimes the distinctions grew muddled. More than a few Americans were killed or wounded by “friendly” bomb splinters, fiery globs of napalm, and rocket fragments, or misdirected cannon shells, grenades, or machine-gun bullets. Whose side the jets and armed helicopters were on at any given moment could never be taken for granted. (from our forthcoming, Seeking Quan Am: A Dual Memoir of War and Vietnam)

American firepower, intent to the point of madness on ridding Vietnam of the people it considered enemies, put more energy into destroying the land than into protecting even American soldiers on the ground under it. It is an aspect of that war that gets overlooked in the debate over politics and strategy. The excuse that it was employed to protect American troops was only that: an excuse. In reality a primal psychological force drove policy and became an end in itself: destroy the land.

We have yet to own up to the responsibility. Fifty years later American money and technology are cleaning up the dioxin around the bases at Danang and Bien Hoa. Well and good but it is a drop in the bucket. That was only where the drums of Agent Orange were stored. The chemical defoliants were sprayed far and wide across the fertile landscape poisoning the earth and the water and creating horrifying birth defects in generations of inhabitants.

Our willingness to inflict that destruction on other people in other places has come back to us, though. More and more places in the United States find themselves under attack from companies willing to poison land and water for a goal they and their elected enablers deem acceptable: wring as much profit from the land as possible, no matter the cost to its beauty and to their own countrymen.

Several weeks ago our group, Writing War At Home, wrote to a prompt about stories. One member, Melissa Sheldon, responded with this:

The story of this precious earth, this vulnerable planet floating through space, is one of truths so varied and so complex that it’s no wonder people tend to focus on their own little corner. If one tends to see only the greed and destruction and callousness of its inhabitants one loses hope and the message becomes depressing and overwhelming.  No one wants to listen, let alone act. And yet, if one chooses to focus exclusively on the bountiful glory and beauty and timelessness of nature—if one chooses to simply BE in the world—can they also be seen as irresponsible?

The truth is that we need to nurture and save this planet while holding both of these viewpoints, these experiences. We need to value the dark and the light side of humanity and its journey on earth. So many frightening things are occurring and so many don’t seem to care. Can we simply choose to escape, those of us that do care, because the work seems overwhelming or do we bring the peace and beauty we find in nature back to the world to balance our work?

Her questions hang in the balance. I add another: can we learn from something—my personal choice is to learn from the war in Vietnam but there are many other possibilities—so that we may live on our earth in a way that nurtures rather than destroys?

2 Responses to "The War Against the Land"