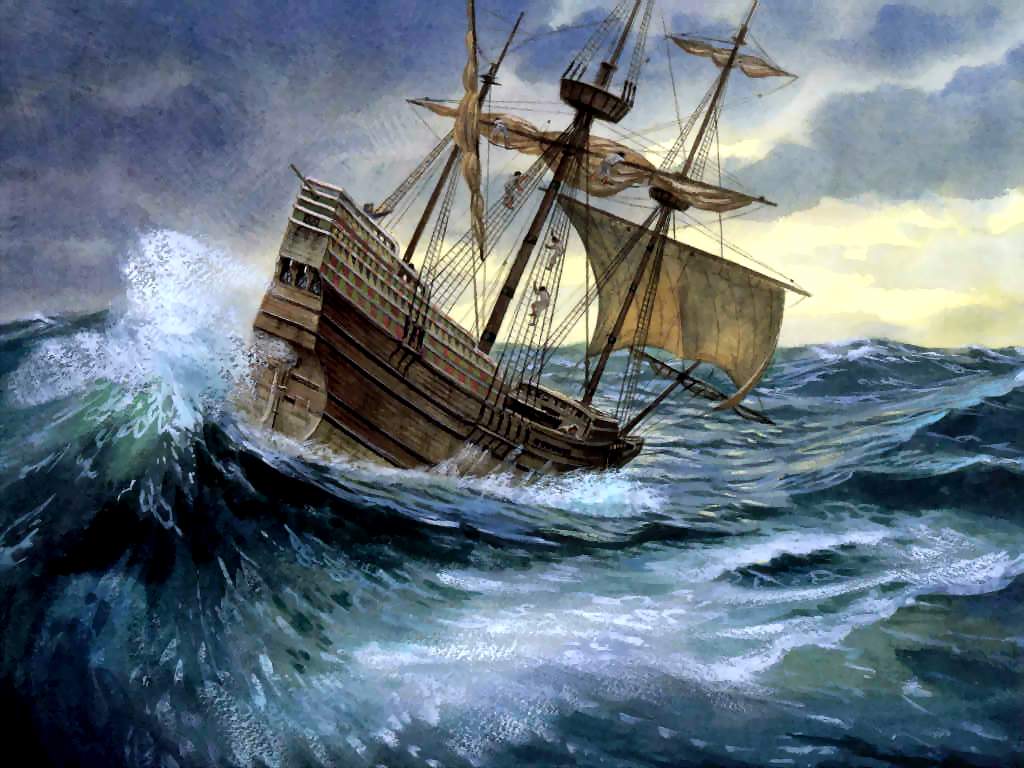 A friend is writing about stories in her family that turn out, upon investigation, not to be true. That made me wonder if the stories in my family that I always accepted as Truth, might have happened some other way altogether.

1. Seven (or was it nine) ancestors came over on the Mayflower. One of them was washed overboard by a wave and the next wave washed him back on.

The story had two purposes – to establish our impeccable lineage and to suggest the favor of Divine Providence. My ancestor was Jonah, swallowed by the sea and spit back out.

But what if he was, in fact, washed overboard but he managed to grab onto a fishing net that was hanging over the side and clung there until the storm quieted down and then climbed back on deck? The astounded passengers would have taken him as returning from the dead and the only way to account for that was Divine Providence. Naturally, he would have allowed the story to stand because he got an extra measure of rum out of it.

2. My great-great-great grandfather, fighting for the South at Gettysburg, survived Pickett’s Charge. He was wounded, crawled against a stone wall and stayed there while the war raged over his head.

Again, the Divine Providence thing. No one seemed to mind that there was no heroism involved, unless ensuring the existence of an entire branch of the family tree counts.

But what if  he wasn’t wounded at all but had had quite enough of this stupid charge, which could only end badly, and he had twisted his ankle anyway and could hardly walk, much less run, and the wall was collapsed a little in one place, which made it ideal for sheltering ….

3. My grandmother on my father’s side and her sister joined the DAR in order to reform it. They found this to be more difficult that they expected but they did successfully campaign to integrate Constitution Hall.

This one was always told with rueful admiration. The women were plucky and quixotic but stubborn and strong-willed. The story was told to reinforce the message that you didn’t want to mess with them.

But what if they joined the DAR because they wanted to? They were fascinated with genealogy (my grandmother worked in a little Victorian study in her house in Richmond and kept caramels in a tin for the grandchildren) and the DAR was the perfect place both to do research and to flaunt the fruits of that research: “Well, OUR ancestor was washed overboard with one wave …” They did have a hand in desegregating Constitution Hall but maybe they did that to piss everyone off.

4. My grandfather on my mother’s side was a carpenter with the reputation for calculating materials so accurately that he could build a house and carry away the remaining lumber on his shoulder.

This was told to establish my grandfather’s honesty, frugality, and, though he had only an eighth grade education, skill at complex calculations. If there was a pecking order in the small town – and there surely was – this story established the family’s standing in it, earned through his labor and the quality of his work.

But what if the place in the pecking order was more important than the honesty and frugality? Because …

5. There was also a story about a coat my grandmother had bought. She wore it to church and – lo and behold – another woman had come to church wearing the same coat. My grandfather whispered to his wife to keep her coat on. After some moments of silent stand-off (it was in church, after all) the other woman took off her coat, folded it up and sat on it!

But what if the other woman never even noticed my grandmother’s coat? She just got hot, so she took the coat off and her pew was crowded and there was no other place to put it. Of course, the story isn’t about coats, it is about status. Which, in a way, all such stories are.

So what if my family was filled with ordinary people, just muddling along, making sense out of their circumstances as best they could?

What fun is that?