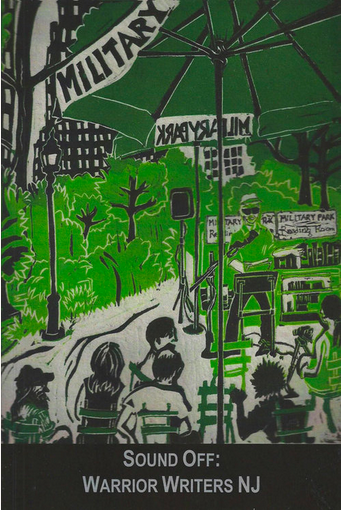 A year ago I sat on a folding chair in an ordinary meeting room listening to poetry. The room had a table with the usual hospitality contributions – bottles of juices and water, crackers, a tray of vegetables and hummus. Another table held books for sale and a third a display of paper made from the pulped uniforms of veterans.

The event was a reading to celebrate the launch of Sound Off: Warrior Writers NJ, a volume whose unassuming size gave little hint of the explosion of power within. Some of the poets were already friends – Vietnam veteran Jim Murphy, Iraq veterans Kevin Basl and Nate Lewis. Others were names I had known for decades but had never met. Jan Barry and W.D. Ehrhart I knew from their work in Winning Hearts and Minds: War Poems by Vietnam Veterans, published while the war was still raging. Dayl Wise, co-founder of Post-Traumatic Press, Walt Nygard, Everett Cox were names I picked up along the way and, listening to their poetry, glad of it.

They cared about each other and about the stories they had to tell. They told those stories like they were just putting them out there, anyone could pick them up who cared to do so. Warrior Writers, a place where veterans come to explore the possibilities writing opens to those who have experienced war directly, is a space where they know the others have shared something of what they have been through and they don’t have to answer to anyone else. The resulting work is authentic, honest, raw in the most satisfying way.

Of course I was moved. I care about them, too, and care about my own life, my memories. I felt anguish, again, for the war of my teen years, and resignation and despair about the ones that followed, but there was something more. I was not satisfied just to sit there in passive admiration, speak to them afterwards to say … it might have been some form of “Thank you for your service,” or would have sounded like that. It took me a while to identify it because it was certainly not expected for someone like me: what I felt was envy. I was jealous they had the opportunity, in community, to talk about war.

Not only do we as a nation outsource war to a small group of citizens, but we outsource war’s consequences. Men and women return from war with knowledge of the worst – and ironically also the best – human beings can do to one another and if they don’t or can’t “adjust” to “normal” society, we decide they “have” something we can label and we outsource their care.

Going to war is one of the gravest decisions a society can make but civilian-citizens play almost no role in it at any stage, other than being expected to “support the troops.” To me, this is the height of irresponsibility and sitting in that room I felt it acutely. And so was born a second group, complementary to the Ithaca Warrior Writers, open to civilians (I am not fond of that term but don’t have another), that is, people with no direct connection to the military who can, in community, talk about war.

Five of us have been meeting for most of a year. We go deep into our histories, our memories, our complicity, doubts, and hopes. Just recently we have gained enough confidence to begin to want to involve others in the conversation. It is deeply rewarding, after all, to reach this point with each other, but now we want to share.

And so I am opening a space, called Writing War at Home. Here we will begin to share some of our topics, perhaps one by one, occasionally as a group conversation. We invite you to respond. We will see where it goes.

One Response to "Writing War"